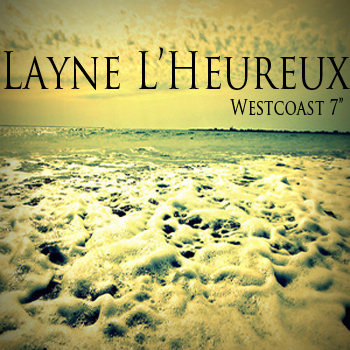 Layne L’Heureux has a monk-like dedication to his craft. His attention to honing his skills is exhaustively detailed in a steady output of extra-length albums over the last three years. Stylistic roadblocks along the way are met with complete reinventions. The evolution of his many incarnations — from Mark Kozelek-styled whisper-folk to grunge virtuoso as the songwriter and lead guitarist for Diehatzu Hijets to sword-for-hire member in a myriad of Edmonton bands — brings us to his current form.

This digital 7″, led by the single “Westcoast”, is once again firmly placed in folk. But, L’Heureux’s former delicacy is replaced by confident layers of vocals and solid chord progressions. There is an absolute, raw honesty here that pumps the heartbeat of these songs.

Still, L’Heureux’s stylistic range is evident. The switch to electric guitar in “Kailee” betrays the rock-and-roll superstar inside him. The synths that emerge in “Reason Why” reveal the irresistibly psychedelic side of his output.

These nuances reveal a significant progression from prior collections. It is a reincarnation, but one that makes use of his buried pasts. Each drastic shift in style is incorporated into a release that begins to demonstrate the best that L’Heureux can offer.

Argue with us: Cancel reply